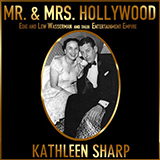 Listening to Mr. and Mrs. Hollywood was an engaging dip into the dramatic cinematic past of Hollywood, California. Readers will enjoy the narration by expert voice actress, Tavia Gilbert, who captures one’s attention and sustains interest with her astonishing versatility. Over the course of the 18-hour recording, Gilbert continues to keep the book compelling. The book features a large cast of characters and the writer, Kathleen Sharp does a remarkable job giving them depth while building them up as larger than life characters. Lew Wasserman and his wife, Edie, were quite the pair in Hollywood from the 1940’s on – he was a cutthroat business man who took a mafia-like approach to his affairs. Ruthless about stealing clients and adept at shady deals that questionably hovered millimeters above board, where Lew Wasserman shined the most was that he was adept at finding ways to stretch the laws as far as they could go or outright breaking them in a way that was difficult to trace. His wife played a supporting role as a socialite/informant to him, giving him access to an open gossip channel that gave Lew insight into classified information. This book was highly enjoyable, with a small critique being a non-catchy title. Some readers may find it difficult to track the dates and names of secondary characters, but overall it is a fantastic glimpse into a forgotten world where the real life drama rivaled that of the pictures Wasserman produced.