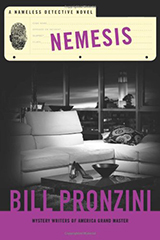 A Jake Runyon Mystery, Another in the Nameless Detective Series

Verity Daniels hired a detective agency to help her deal with a case of extortion. She claimed she was receiving threatening calls from someone demanding money. Detective Jake Runyon agreed to take the case, but soon found himself in an awkward situation when Daniels came on to him, and he eventually began to question whether her claims of an extortionist were true. When he dropped the case, she threatened to sue, but Jake’s real troubles started when she was murdered.

Nemesis is the fortieth installment of Bill Pronzini’s popular Nameless Detective series, which Mystery News calls “one of the finest investigator series going.” Bill Pronzini has been nominated for, or won, every prize offered to crime fiction writers, including the 2008 Grand Master Award from the Mystery Writers of America. He lives and writes in California, with his wife, the crime novelist Marcia Muller.