On the Razor’s Edge 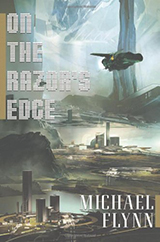 On the Razor’s Edge by Michael Flynn is the concluding book to The Spiral Arm Series. Set amongst the secret war between the Shadows, Bridget ban has organized a group of Hounds to go after her kidnapped daughter. However, Bridget ban’s daughter willingly went with Ravn for the purpose of luring Bridget ban into a quest to rescue the scarred man, Donovan buigh. Unless Donovan buigh can remember the information locked within his mind his keepers will resort to more torturous methods. As tensions rise, all sides of the conflict are running out of time.

A mixture of science fiction and fantasy, On the Razor’s Edge creates a unique world. While it is not necessary to have read the rest of the series, readers may find themselves struggling with the large cast of characters they are not familiar with. Many of the characters in the book have heavily accented dialogue, reminiscent of a Scottish burr which may be jarring for some readers. On the Razor’s Edge is fast moving, and does a solid job of wrapping up the series.