Origins of the Suez Crisis: Postwar Development Diplomacy and the Struggle over Third World Industrialization, 1945-1956 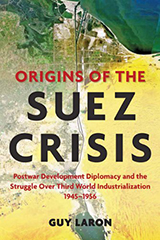 Using Foreign Aid as a Tool

Over the coming years expect to see more and more books written about the early years of the Cold War. A topic that is long forgotten, and often ignored, but one that had important ramifications on the world order after the end of World War II. This particular book focuses on the early years, and how the Soviet Union and the United States used development projects as a tool for diplomacy in the Third World, with particular focus on Egypt and its decision to nationalize the Suez Canal, and the brief war that followed. Most of the book is focused on Great Britain and its struggle to maintain its empire with no money, and no prestige left. It then talks about how the Soviet Union and the United States both used each other to get what it wanted, how they danced to each other’s tune.

This is a well written, and well research book. It is not easy to study this part of world history with all the competing factors, sources, and information available. With many different ways to go about it Guy Laron does an excellent job, and he is able to get it concise and to the point.