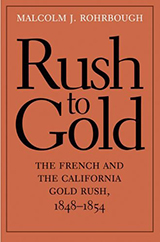 The World After Gold

Many books have been written about the California Gold Rush; one of the largest, and quickest, migrations to a single spot in the world. It encompassed many people who wanted to strike it rich. A good portion of the books has focused on life in the mining camps, politics, culture, and now more ethnic studies of groups of miners. This book looks at how one country perceived the California Gold Rush, how individual people reacted, and the overall effect on society. France at the beginning of the Gold Rush was just recovering from violent protests in the streets during the 1848 Revolution. The economy was in shambles, so the news of gold from another land was encouraging news for a society that was suffering. People left their families, pulled up stakes, and went halfway around the world to attempt to make a fortune.

This reviewer wishes this book were better. It really does not stand out, the only thing that stands out is that it focuses on the French community, and people from France. Besides that the writing is dry, and slightly boring. After a while you wonder if it will end, or will we hear about companies again. Not the best book by this author, nor about the Gold Rush.