Soundings: The Story of the Remarkable Woman Who Mapped the Ocean Floor 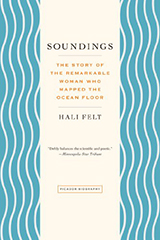 The name Marie Tharp probably does not ring familiar unless you’ve read Hali Felt’s Soundings: The Story of the Remarkable Woman Who Mapped the Ocean Floor. Alfred Wegener’s 1912 theory that continents drifted remained controversial and taboo for decades. However, when work in the 1950s and 1960s to map the ocean floor using sounding measurements found extensive rift valleys, Wegener was vindicated, and he would have had Marie Tharp to thank for it. Combining attention to detail, patience, and artistic ability to a grand scientific question, Tharp and colleagues at Columbia University created beautiful large-scale maps of the ocean floor. Yet she was a woman working in a male-dominated field, and there were repercussions. She persevered, remaining active with her work until her death. Her work was hugely significant to geology, but she is largely unknown. Felt tells her story wonderfully, showing us the science, the process of map making, the rifts in Tharp’s own life, and perhaps most interestingly, her own process of discovering Tharp as a writing subject and her own research. Just as Tharp sifted through data to produce a more complete picture of the Earth, Felt has sifted through the archives to write a more complete biography of a significant scientist of the twentieth century.