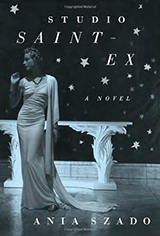 Ania Szado introduces the reader to the New York fashion world in the early 1940s in Studio Saint-Ex, a fictional tale of Saint-Exupery (the writer of The Little Prince). Mignonne Lachapelle is a twenty-two year-old recent graduate of a fashion school in New York. She wants to make her mark in the fashion world but battles several obstacles including the theft of her design by her professor. Mignonne falls in love with Captain Antoine de Saint-Exupery, who fled to New York from the French Air Force. Antoine is married to Consuelo, his fiery and hotheaded wife. Antoine and Consuelo are unable to live together peacefully but also cannot live apart. They each take on lovers to try to make their spouses jealous. Mignonne unfortunately gets stuck in the middle of the dysfunctional pair by loving Antoine and by needing Consuelo to break into the fashion world. Mignonne develops a plan to bring Antoine’s The Little Prince to life, while also bringing light to her fashion prowess.

Studio Saint-Ex is a unique perspective of how American fashion garnered its own fame distinct from the Paris fashion world. Szado brings her characters to life through adept details and creating characters that the reader will love to hate, yet also feel sorry for. Read on to learn about struggles for fashion, World War II and the well-loved book, The Little Prince.