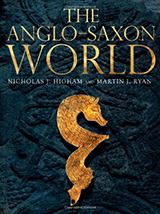 A Pan-disciplinary View of the Anglo-Saxons and their Enduring Impact on the World.

The Anglo-Saxon World is a lovely tome of a book devoted to an interdisciplinary approach to exploring the Anglo-Saxons and viewing their influence with fresh science, answering the central question, in a digital landscape, do the Anglo-Saxons still matter. The answer: yes.

Authors Nicholas Higham and Martin Ryan convincingly argue that few other cultures have had such a long-lasting or far-reaching impact on the modern civilization as did the Anglo-Saxons. They changed the face of Britain, and, therefore, the Western world. Some forty generations since the battle of Hastings, when the line of Anglo-Saxon kings fell to the Normans, their influence can still be felt, not only in the English language, but in the monarchy, the English system of government, Christianity, settlement patterns and estates in England, and, most importantly, in the national identity. Higham and Ryan combine data from archeology, linguistics, numerology, art and architecture, and all manner of sciences to portray the most accurate, cross-disciplinary view of the Anglo-Saxons and their reverberating impact.

While it might sound boring, it’s actually quite exciting, especially if you love anthropology, as this combines the historical record with science to create a whole new view of the period.