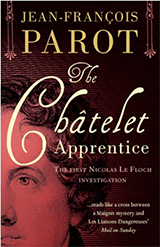 The year is 1761, France is at war with Prussia and England, the king is under the influence of Mme de Pompadour and some compromising state letters are missing. Into this environment, young Nicolas Le Floch arrives in Paris where he quickly finds himself in the middle of political, military and criminal intrique. As a detective-in-training, Nicolas is assigned to begin his apprenticeship at the dreaded Chatelet prison. Not only must he identify three recently discovered bodies, find the motive for their brutal deaths and those responsible for the crimes, he must also learn his way through the intricate and just as deadly social maze that is the court of Louis XV.

“…the unwritten rules of his profession were impressing themselves upon him day by day.”

Recently translated into English, this is the first in a popular French series of police procedurals with Nicolas Le Floch as the main character. The outstanding attention to historical detail and a writing style that is vaguely reminiscent of its 18tgh century time period sets this book apart from many in the genre. It’s easy for contemporary readers to be drawn into the world and work of the young detective, even though the mystery is set more than 200 years in the past.