The Confessions of Al Capone 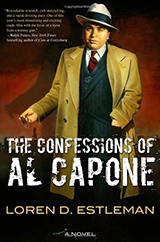 Scarface as an Old Man

Loren D. Estleman brings his well-developed voice and experience writing numerous murder mysteries to one of the most notorious figures of the 20th century, Al Capone. Estleman in The Confessions of Al Capone turns his attention to the end of Capone’s life. The book is told from the perspective of Peter Vasco, a FBI special agent who poses as a priest at the behest of J. Edgar Hoover, to try to pin some of Capone’s many crimes on him. This disguise is somewhat troubling to Vasco, who had once been in the seminary himself. It also brings him back into contact with his aging father, who had once been part of Capone’s operation. Estleman uses his years of story telling expertise to weave these disparate threads into one. Readers who are sensitive may be offended by the casual use of racial slurs, but they do help evoke the attitude of the time, and don’t appear in the text simply for shock value or to offend. This book may not appeal to all readers, but mystery fans, as well as people who are interested in Prohibition or the early FBI will all adore this book.