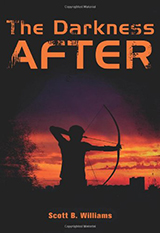 The Darkness After follows teenaged Mitch Henley and April Gibbs as they try to survive after solar flares fry all electrical devices on earth. After saving April from a gruesome death Mitch decides to travel with April while they search for their respective families in this new dangerous world. Staying in the woods seemed like a good plan at first, but the wildlife isn’t the only things they have to look out for.

While author Scott Williams clearly understands wilderness survival, and those segments of the book are engaging, The Darkness After adds little to the apocalyptic survival genre. The dangers faced during April and Mitch’s travels are predictable and clichéd. The characters are flat and uninteresting, and the dialogue is poorly done and often repetitive. Neither April nor Mitch act appropriately for their ages, coming across as much younger or too old. April’s quest to reunite with her baby and her boyfriend feels forced, and often like an afterthought. There are plenty of books in this genre, and The Darkness After gets buried by its competition.