The Millionaire and the Mummies: Theodore Davis’s Gilded Age in the Valley of the Kings 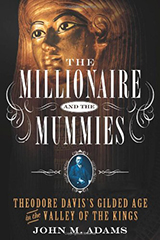 The Man Behind the Mummies

If one has seen an Egyptian exhibit in a museum, the person to whom credit and gratitude should be given is Theodore Davis. In the early years of the 20th century, he financed and even oversaw many of the excavations in the Valley of the Kings in Luxor, Egypt. In The Millionaire and the Mummies, John M. Adams describes how a young son of a widowed mother grew into being one of the wealthiest men in the United States, how his curiosity and cunning took him from Michigan to Iowa, to New York and on to Egypt, and how his choices in the Valley of the Kings shaped archaeology.

“Davis’s personality was the product of his experience, and he would always retain a bit of a rough-edged, frontier persona. His intellectual curiosity and continual self-education overcame his lack of formal schooling, but although he became an extremely sophisticated individual he was never what eastern society considered polished. He was ‘eccentric’ and ‘brusque,’ and known for ‘wisecracks and tactless sayings.’”

Adams writes with clarity about Davis’s choices and the results of those choices. He intersperses what could be long narratives of scientific digs in Egypt with stories of how Davis came to be the financier that he was in his 70s. The book weaves a fascinating tale of a man whose name is little known outside the Egyptian archaeological world, and weaves it well.