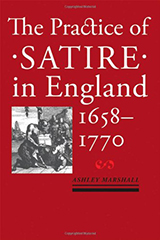 Satire and its Role in Society

Satire has played a major role in literature for a long time. It is a way for people to poke fun at others, without really getting into trouble. Though at times satire can go a step to far and actually can get the author in trouble. One thing that is difficult to agree on is the definition of satire, and what makes a particular piece of work a satire. The idea of satire has changed over the centuries, and for a while there was no specific term for these types of works. Only later was the term satire used. In this work Ashley Marshall looks at the evolving role of satire in England, and how satire itself changed; between the crucial years of 1658-1770. From the many different types: novels, plays, poems, prose, and pamphlets. While her concern is not about the meaning of different works, instead it is the interplay of how satire changed its mood and its method of attack. The author does a very good job of going through the many details, authors, and satires. At times it can become a bit slow in the middle parts of the chapter, she manages to keep it together throughout the book. This will be a great reference for students of literature.