The Same Tapes: You’ve Never Read Anything Like This Before 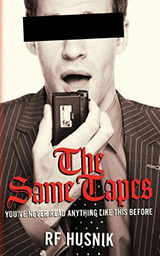 Husnik’s first novel, The Same Tapes, is one of moral allegories not unlike the morality tales of John Bunyan’s novel The Pilgrim’s Progress published in 1678. The Same Tapes is a modernized version of a time traveler tale. The narrator, Joseph Same, is sent by angels/seraphim to gain knowledge through his travels to the past and to alter his sinful life before it’s too late. From Time to Time by Jack Finney also bears a slight resemblance to The Same Tapes especially when the protagonist tries to prevent the Titanic from going down in order to stop WWI. In this book, Joseph also revisits several war zones from the past but is unable to prevent the wars.

“Some day down the road another maniac will relive a war where he once brutalized humanity from his perch in central Europe.”

When Husnik abstains from excessive explanations the story heats up. In “Robbery,” Joe tells of his encounter with Jesus. The story “Tempora” takes place in 1865 when Joe returns home after fighting the Yankees in the Civil War. The story comes alive when Joe, a confederate soldier, comes marching home from the war only to find three Yankee soldiers camped out in his home. His two sisters and parents are missing. Here the author creates a sense of intrigue.

At rare intervals, Husnik’s stories are engaging, especially when there is less telling and more showing. Furthermore, the plot of the story becomes buried in the lack of coherent organization in each chapter, as well as the author’s same obsessive back story retelling in almost every profuse chapter of the book.