The Shepherd of Destiny 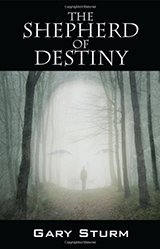 Is Destiny Chance or Choice?

If you had the chance at a do-over in your life, would you take it? If that do-over was promised to make one of your dreams – the one you continue to chase – come true, what would you risk to take it?

Danny Loveless, the protagonist in The Shepherd of Destiny by Gary Sturm, receives just that opportunity. Although already a husband and father, he continues to focus much of his adult life on finding the “perfect” woman. As he is eating lunch in the park one day, he meets Byron Shepherd who, without preamble, informs him that he can assist him in his quest. But there’s a catch. In order to find the “perfect” woman, he must leave his current wife and child behind and take an entirely different path. Making this choice will erase them from his life.

“He was being drawn toward a strange new world, a Carrollian land of inverted logic where reigned the head-chopping queen of chaos.”

Paralleling his story is one of Burton Rheinstein, a self-made Leader of a church of selfishness. Danny attends one of his rallies and is both intrigued and appalled. Danny wavers between belief in Rheinstein’s doctrine of self-absorption and selfishness and a feeling skepticism that the church is nothing but a sham. Along his path to find the “perfect” woman, Danny has relationships with several females who are both attractive and attracted to him. As each comes into his life, Byron Shepherd asks Danny if he loves her. Danny continues to find flaws that ultimately end the relationships. By the time the “perfect” woman enters his life, he is so jaded that even perfection itself is a flaw.

Interlaced within the story is the concept of time. What is it? How does it work? How does one, as Shepherd claims he does, travel through it? How can you change it? Sturm takes on the challenge of presenting the concept of changing or affecting time and engages the reader’s imagination beyond just the storyline.