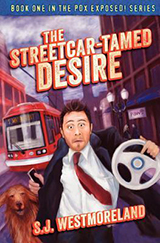 A Story that Keeps You Amused Until the End

Set in modern day Portland, Oregon, The Streetcar-Tamed Desire starts as the story of Michael Childress, a young ad executive whose desire for a car is pressed under the frown of his environmentalist wife, Magdelen. The plot soon thickens and weaves around more characters – each interesting and engaged in conflicts of one kind or another.

The novel reads like a gentle satire on some of the contemporary causes held dear by certain groups of people – animal rights and environmentalism being two. At the same time, the plot reveals how opportunity and challenges go hand in hand as people continue to overlook the potential consequences of many of their actions.

A main positive point of this book is its use of fine language with no excess or unnecessary use of expletives or four-letter words that have become more of a norm than exception in contemporary humor. Westmoreland also keeps her characters sane, mostly non-dramatic and well-defined. The excellent characterization also draws from the range of personalities depicted in the story, creating a fine balance.

One of the few weaknesses found in the novel is the use of clichéd constructions. For example, Westmoreland relies on the domineering wife and tame husband, a young love-hungry girl and the element of comedy of errors, which has been used so many times in sitcoms. It is difficult to suggest how such time-worn elements of comedy could have been avoided, but their presence is obvious.

However, the humor itself is not raw nor wild. The narration is smooth and engages the reader. Chapters are fairly short so some readers may find the book a little fragmented. But as the climax of the story approaches, the pace of the narration fits well with the events that lead to the chaos in the Pioneer Courthouse Square scene. The ending is lovable.

The Streetcar-Tamed Desire is a delightful read for people with a good taste in humor, and especially for those who have lived in or visited Portland, Oregon.