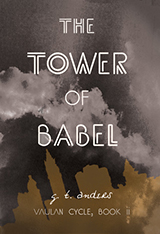 It’s 1967. Austin Feckidee is an artist, but he hasn’t quite found his muse. He has a grant, but he has yet to produce anything. Living in Babylon, in the shadow of an immense structure being constructed, a tower to the heavens, Austin feel stifled both creatively and personally. His girlfriend nags him. She’s not really what he wants. But, then, he doesn’t quite know what he wants. His life is like his art: directionless. When he receives a message from Stella, a woman from his past, inviting him to retrace his footsteps, to return to a life he left three years prior, he is unable to resist.

But Stella’s invitation is not of a romantic nature. Instead, she is inviting Austin back to L’Hermitage, a micro society in which Austin once existed with three other people. They want to destroy this new Tower of Babel, to travel through time and space—and they know they can. They just need to work together. Wait, what? But it becomes more complicated, as at L’Hermitage Austin encounters a plant, perhaps of divine/otherworldly origins, that affects him in ways he can’t believe—and doesn’t feel he can share with anyone. But he needs the plant. In its consumption, he finds his purpose, he finds his strength, and he can finally create the art that he was born to…and, perhaps, realize what he truly is.

The art that Austin creates also allows his girlfriend the opportunity to capitalize on his art, selling the pieces for millions upon millions of dollars, changing his world, his perception, and perhaps the entire world around him. Meanwhile, the Tower continues to rise, and those at L’Hermitage continue to seek the truth and work toward the ultimate resolution of their mission.

If this all sounds confusing, it’s because it is. G.T. Anders has crafted a world that is at once very believable and also outlandish. The Tower of Babel is a story with obvious Biblical overtones, but also about art and purpose and community/connection. One of Anders’ strengths as a writer is to make his audience empathize with his characters. While Austin and his friends at L’Hermitage are a confusing quasi-terrorist/cult-like group, you care for them, you’re interested in their plight. Yeah, maybe they want to end civilization as we know it, maybe they think the new New Babylon is basically evil, maybe they spend a lot of time discussing alternate universes, and maybe they live in an abandoned, dilapidated church—but you feel for them, for their cause. It would be easy to make them cartoonish, but Anders doesn’t. They may be bizarre, they may not make sense to us, and we may not agree with their cause—or perhaps we do?—but they are always very human.

And whether the Tower stands or falls, we want them to succeed in some way. Even if Austin can be a bit pompous.