Three Days in Gettysburg: An Intimate Tale of Lost Love and Divided Hearts at the Battle That Defined America 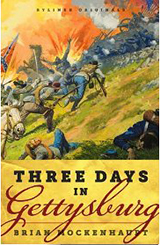 The Battle at Gettysburg happened in the first three days of July 1863, 150 years ago. In this book, Brian Mockenhaupt – himself a veteran – gives a short but detailed and dramatic account of one of the bloodiest Civil War battles. Gettysburg occasionally becomes a battlefield, and citizens of this small town find themselves in the middle of the fight completely unprepared. They are frightened by the possibility of Confederates victory. Still, they provide both sides with water and food, care for wounded and after the battle bury thousands dead. However, the sad personal stories of the three town’s childhood friends killed during the battle are what make this book appealing. Fighting for the Confederates, Wes Culp falls on the field named after his uncle. The captured and wounded Union soldier Jack Skelly dies in the hospital. Loving Jack Jennie Wade happens to be the only civilian victim of the battle.

“…even in the early days after Gettysburg, people suspected that this battle was unlike any other of the war.”

Historians and Civil War history fans probably already know a lot of statistics and numbers that Mockenhaupt provides here, but they are very successfully intertwined in the narrative. The vivid descriptions and many excerpts from witnesses’ letters and diaries make this book interesting for a broad spectrum of readers.