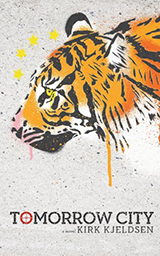 The Past vs. Current Choices: Reinventing a Life

What does it take to reinvent a life? From the first page of Tomorrow City until the last, readers will be drawn into a story that asks that same question. One character, Brendan Lavin, gives readers a first person account of what it takes to change. Tomorrow City is nitty-gritty and depicts real life. Kjeldsen doesn’t shy away from depicting the life of a criminal and the doubts that arise when Brendan decides to give up a life of crime. There are senseless deaths and lives are destroyed. But through it all remains a small sense of hope, a sense that people can change, that life moves on and that a person is made up of more than just their past.

Kjeldsen does a great job of immersing readers into his story. From New York to Shanghai, and everywhere in between, readers are right beside Brendan on the streets. Kjeldsen depicts all of his activities in vivid detail…walking to and from work, spending time with his daughter, trying to make ends meet at his bakery. Brendan’s innermost thoughts are woven throughout the descriptions which gives readers a glimpse into the mind of a man trying to remake himself every single day. And readers are left wondering about what it takes to reinvent a life. Brendan struggles, especially after his past comes back to haunt him. He grapples with protecting his family and trying not to fall back into the life he led. Brendan’s reinvention goes beyond moving to another city. He’s on a journey to transform himself from a lowlife petty criminal to a loving father with a thriving business.

“Hope was a powerful force–or was it denial…And when it all came down to it, weren’t they more or less the same thing?”

Tomorrow City isn’t a cookie-cutter crime novel. Don’t read it if you’re expecting the main character to have a rigid moral compass. The killer isn’t locked away for good before any blood is shed. Everyone doesn’t go home and live happily ever after. It’s a story about choices and the rippling effect those choices can have on a person and the people around them.