Under This Terrible Sun 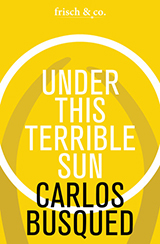 Equally part stoner manifesto, part mystery/thriller, part psycho-physiological novel, and part poetry, Under This Terrible Sun is an exciting and morbid ride through the outskirts of Mexico focusing on Javier Cetarti, a slightly functional pothead, who is notified that his family has been massacred and now has to tend to their affairs. Of course, all he cares about are drugs, money, television, and shows little reaction to the blood bath. Of course the massacre was at the hand of a murderous and suicidal boyfriend who happens to have an ex-wife, who exhumes her infant sons body to keep at home. These aspects are gruesome but make for a functional set of characters through dysfunction.

“The entrance of Gancedo Cemetery was a skeletal cement archway crowned with a cross made of iron bars. There was a sign painted in capital but childish letters that said: IT IS STRICTLY FORBIDDEN TO BERY[sic], REMOVE, OR EXHUME HUMAN REMAINS WITHOUT MUNICIPAL AUTHORIZATION. OFFENDERS WILL BE PUNISHED ACCORDING TO MUNICIPAL LAWS IN FORCE. THANKS.”

The interesting thing about this novel is that the author, Carlos Busqued, is able to make the most mundane daily activities gripping – ordering pizza, driving, caring for a reptile – while making the most heinous occurrences, murder, death, loss of job, forgettable. Peppered among all of this are eloquent passages of prose that will mold how you perceive life following completion of the novel. I believe that Frisch & Co. is an interesting publishing house that will release many similarly daring novels due to the freedom created in their electronic-only releases.