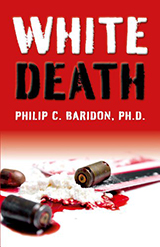 It’s 1969 and Marcus Sterling is a drug cartel boss. Jake Stone is an undercover cop. In fact, he’s undercover in prison to meet one of Sterling’s friends. Oh, and he’s also flying cocaine for the Barranquilla Cartel in Colombia, trying to take Sterling down. But, as often happens in crime novels, things don’t go quite according to plan and Stone ends up in a fight to the death with Sterling and his subordinates. It is a fight for his wife’s life as well.

Author Philip Baridon is a former police officer who has also worked for the U.S. Justice Department. His work with drug trafficking informs White Death and his experience working on the streets as a police officer adds gritty authenticity to the dialogue and situations in which his cop characters find themselves. The dialogue between police officers reads like a more coherent, less 40s film noir version of James Ellroy. Their interactions with one another and the public seem genuine, not forced or contrived. There is a realism in the dialogue, in the narration, that doesn’t worry about offending, that isn’t concerned with being politically correct, but only with being honest.

This noir-like novel is well-written and quick moving, with a storyline that keeps pushing forward, compelling readers to turn the page, to find out what happens next. Set in 1969, when racial tensions are still boiling over, White Death has many layers of complexity to unravel. It is a story of men, drugs, crime and humanity. This is a brief novel that makes a big impact. And what better compliment can one give?