Why Do I Sing?: Animal Songs of the Pacific Northwest 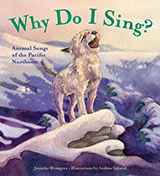 A Sense of Place Through Animal Song

Author Jennifer Blomgren and illustrator Andrea Gabriel, who previously collaborated for Where Do I Sleep? A Pacific Northwest Lullaby and Where Would I Be in an Evergreen Tree?, bring to the world of children’s nature books a third title that is just as warm, fun, and visually appealing. In Why Do I Sing? Animal Songs of the Pacific Northwest?, children are introduced to fifteen animals of the land, sea, and air that live in the Pacific Northwest, from Spotted Owls and Pacific Tree Frogs to fin whales and marmots. The spineless are included, too (crickets and honeybees). For each species, Blomgren provides rhyming text to convey to the reader a sense of the animal’s appearance, its habitat, and, as the title suggests, its song. The meadowlark sings “in the brightness of day, on a fence near a sweet-smelling field of mown hay” while “in the soft evening hush” a Red-Winged Blackbird sings “with a voice clear and lovely, from a green cattail rush.” Humans are included at the end as animals that sing, a welcome reminder that we often forget how we are connected to the natural world in incredible ways. Some of these animals live elsewhere, too, and for that reason Why Do I Sing? can be enjoyed by families far beyond the Pacific Northwest.