Aged to Perfection – A Comedy in Two Acts 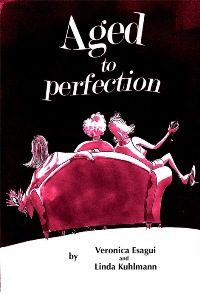 Presented by Fertile Ground: A City-wide Festival of New Works and The Lakewood Theater Company

Walking into the Lakewood Theater Company’s production of “Aged to Perfection” felt like walking into a drama class. Many patrons knew each other or were sponsors of the Company or the Center. It was friendly, warm, welcoming; an intimate environment for the production’s debut reading.

The stage was set with about a dozen chairs lined up in front of the curtain and four to six chairs facing each other on the extreme right and left sides of the stage. One chair sat alone to the left and forward of the line of chairs, facing the audience. A very barren stage.

As the production began, the Narrator (Margie Boule) explained that the actors would all be reading their parts, on stage with their scripts in hand. Walking around the stage, she pointed out where to imagine the couch (three chairs on the left side of the row), the kitchen table (a bit to the right of center), the hutch with the liquor bottles and glasses sitting on it (to the right of the table and closer to the audience), and the TV (her chair, as it was her role also). The right side of the stage was the stairway to the bedrooms; the left the door to the porch and outside. From there, the play unfolded like a bud blossoming.

The storyline was simple: family and friends gather at a neglected home and vineyard to celebrate the life of one of their number who had recently died. That ended the simplicity. Lucy (Jennifer Rogers), Irene (Harriet Walker) and Mildred (Lillian Christina) have sharp wits and tongues reminiscent of The Golden Girls. Maggie (Dodie Holstrom Weiss), an ex-hippie who works with co-ops and communal living, is the living glue of the group, cooking and helping out wherever she can. When attorney Alan (Steve Knox) arrives to read the will, he shares with Frank (Allen Denison), Maggie’s father, a life-changing piece of his past: having been at Woodstock. Frank tells Alan that Maggie went there too and talks about her ‘Dalmatian van’, which Alan recalls with some fondness. There are fun twists in the midst of the family stories as the production winds its way toward its happily-ever-after ending.

The strength and pace of the story kept the audience from missing the set. At one point, an audience member’s cell phone rang and the Narrator improvised, “Laura (Valerie Vorderlandwehr), turn off that cell phone! Teenagers nowadays!” The biggest drawback and distraction of the presentation was the Narrator reading what the characters interaction with each other would be [e.g., “Laura kissed Frank on the head”] rather than the actors actually performing the actions. It has the potential to be even livelier as a full-set production.