Any Resemblance to Actual Persons: A Novel 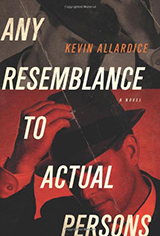 In Kevin Allardice’s novel, Any Resemblance to Actual Persons, what begins as a standard letter to the editor quickly devolves into a stream of consciousness as Paul McWeeney begins to loose track of reality. Paul begins the letter in order to refute the clam in his sister Edie’s book, that their father was responsible for the Black Dahlia murder. As a struggling writer himself, having written two manuscripts that have yet to be published, his resentment for his sisters’ success quickly takes over the narrative. In his attempt to prove his sister’s mental instability, Paul begins to prove his own instability as well.

“My sister is not of sound mind, and this should disqualify her from having a book published.”

Any Resemblance to Actual Persons is quite a unique read. The book is written in the form of a letter, and the lack of chapter breaks emphasizes the tangential nature of the book. However, readers may see the lack of an obvious pausing point strangely exhausting. Paul’s character becomes more difficult to relate to as his thoughts become jumbled as the narrative progresses, delving into family relationships and past regrets. Interestingly enough this very chaos is a large part of the draw of the book. Any Resemblance to Actual Persons promises a multilayered story and a look into an obsessed mind.