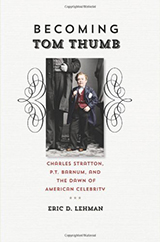 Eric Lehman’s Becoming Tom Thumb hits a sweet spot of celebrity biographies. Its subject is timely, riding on a new wave of interest in historical circuses and sideshows. It chronicles, as far as is possible, the life of Charles Stratton, known as General Tom Thumb, from his birth in Connecticut, through his life as child actor, and his career on the stage as an adult performer. The book is published by Wesleyan, and has won recognition for its focus on evoking 19th century Connecticut, so readers familiar with that part of the country will enjoy this focus. Lehman also works very hard to keep his book scholarly, giving the reader only what can be determined by the facts, and not imagining emotional responses for his subjects, but the book is still highly readable and entertaining. Lehman also presents “the General” as a fully developed human being, recognizing his amazing ability to create a place for himself in a world where he was different. The label of “circus studies” or “freak studies” never limits Lehman and he is able to give his subject the full recognition he deserves.