Bloodhound in Blue: The True Tales of Police Dog JJ and His Two-Legged Partner 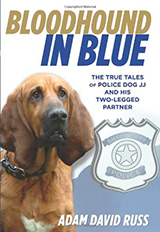 Hounded Out by JJ the Police Dog

The Bloodhound in Blue is ‘JJ’, partner to young officer Serio with Utah’s Salt Lake City police. For 9 years JJ tracked the good and the bad, from missing children and lost elders to thieves, murderers, drug peddlers, and other scoundrels. As a pup JJ was a household pet, but when he matured and his amazing tracking abilities became obvious (along with his immense size and loud baying) officer Serio gradually worked him into the action. In time, JJ became a media sensation, successfully aiding in hundreds of finds, most leading to arrests. He was beloved by many, but was feared as “that damned dog” by most villains.

The author clearly distinguishes between bloodhounds as trackers and German Shepherds as attack dogs best used in potentially violent circumstances.  But securing JJ’s role as a police dog was not easy. Will JJ find his mark, and his place on the force? Will the German Shepherd handlers on the force accept a Bloodhound into their ranks? Not easily. This memoir about a working dog and true-life police procedural is thoroughly researched and well written, with enough suspense and tension to keep you up nights reading it.