Book of Ages: The Life and Opinions of Jane Franklin 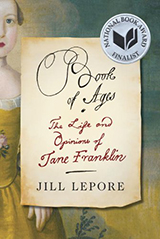 In an age when women might not so much as learn to write their names, Ben Franklin’s little sister epitomized the life most women led in 18th century America. Standing in contrast to her famous brother, two lives could not have been less alike.

“History is what is written and can be found; what isn’t saved is lost, sunken and rotted, eaten by earth.”

This is a history that will keep you eager to turn pages; from Jane’s early life, filled with much grief, into her later years, which granted her the time she so craved, to read, write letters, and reflect. This beautifully and lovingly written book depicts the life and times of Jane Franklin, through her remaining letters and papers. From her mediocre marriage to the loss of many of her children, Jane did not live a charmed life, but like many colonial women raised her family, nursed her aging parents, and lived lightly on the surface of history, leaving little in the way of papers and traceable materials behind. Her work, in later years, was dubbed by scholars as not important.

Book of Ages: The Life and Opinions of Jane Franklin by Jill Lepore is a quiet story of a quiet life, written with a quiet but lively and chatty hand – much like Jane herself.