ClanDonnell: A Storied History of Ireland 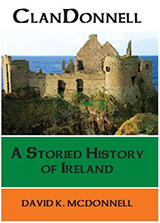 An Absorbing History and Story

ClanDonnell: A Storied History of Ireland by David McDonnell is history done well, very well. This epic story of Ireland is entertaining as well as informative, with a pleasant, easy-going authorial voice. At times it almost reads like an oral history as opposed to one that is thoroughly researched and excellently executed.

This book deals specifically with the clan history of Clan Donnell, both in Ireland and the intertwined lineage in Scotland. They are a lively bunch, and ClanDonnell is filled with the “wars, murders, abductions and intrigue” one expects from a Celtic tale. David McDonnell set out to compile a family history, with the result being a collective history of all of Ireland. He successfully organizes an ungodly amount of information, all while working to answer the central question: “Who are the McDonnells?”

With such a large book, it’s easy to approach it with trepidation. So it is important to feel you’re in good narrative hands. In just the first few pages David McDonnell puts you at ease that you are being led by a competent narrator, and you feel good that the navigation of the subsequent tome will flow with relative ease, or at least with a lively voice with a well-timed sense of humor.

This is a BIG book, and it’s packed with A LOT of history, from Brian Boru and Somerland of the Isles to St. Patrick’s Day, with a lot of McDonnells fighting and dying in between. It explains the clan system, the significance of the gallowglass, why the British couldn’t keep a standing army in Ireland, basically everything from the origins of the Celts to green beer. There’s also a dizzying number of Johns, Alexanders, Donalds, McDonalds, Somhairles, Ians, Iains, Anguses and Ogs, but glides along smoothly and quickly. It’s arranged in brief sections, often interwoven with pictures and genealogies to help the reader keep track of who’s who, thus it reads like a much shorter book,  making it pleasurable to spend over 900 pages with clan Donnell, always known as fierce and independent, lovers of good drink and wit. The only way to improve this book would be a comprehensive index.