Confessions of a Latter-Day Virgin 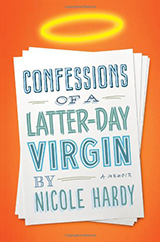 A Captivating Memoir about Religious Devotion and the Search for Love

It’s rare to know that you will love a book before you crack open it’s spine, but I was certain I was in for a treat reading Confessions of a Latter-Day Virgin after I got the chance to see the author of this captivating memoir, Nicole Hardy, perform at Portland’s unscripted storytelling show, BackfencePDX. Her live telling of an encounter she had with a handsome Australian tour guide while traveling solo in the Caribbean had me cracking up and I knew her personality was so charming and infectious I just had to read her memoir. It did not disappoint. In her poignantly candid book, Confessions of a Latter-Day Virgin, Hardy’s chronicles her life growing up single in the Mormon church and her struggles with celibacy and the expectations of her religion, ultimately leading to a crisis of faith. In the end, Nicole Hardy finds what she’s looking for – fulfillment and happiness on her own terms.

From the start, Nicole Hardy’s prose is simultaneously honest, thoughtful and laugh out loud funny. Growing up in the Mormon faith unsure if the life of a mother and homemaker was for her is difficult for Hardy and she doesn’t simplify her dilemma or sacrifice describing the complexities of her faith for laughs. Throughout her intimate memoir, Hardy instead finds tender thoughtfulness and humor in the conflicting personal and religious values she juggles, all the while searching high and low for Mr. Right.

Confessions of a Latter-Day Virgin is very relatable to anyone who has ever considered themselves a late bloomer or tried to reconcile beliefs and practices that didn’t fit the life they aspired to. Hardy shows us a fulfilled life is possible – sometimes we just have to let go of what we thought we were looking for and embrace who we really are.