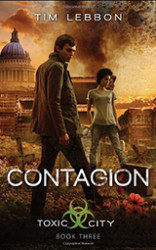 Contagion is the final installment in the Toxic City trilogy by Tim Lebbon. Two years ago London was destroyed in a sudden attack. While the rest of the world believes what is left is a toxic wasteland, a number of people did survive. The survivors have developed startling psychic abilities. However, the survivors feud amongst themselves and must hide from or fight against the military forces determined to experiment on them and keep them contained. Escape for the survivors becomes the number one priority as they discover that a nuclear bomb has been planted in London, about to turn London into a toxic city for real. Jack and his friends must find a way to escape before zero hour.

The story behind Contagion is intriguing, as is the myriad of abilities the characters have developed. However, the characters are flat and have a tendency to repeat themselves which readers may find annoying. While the setting is a destroyed London, an apocalyptic scenario that many would typically enjoy, this fact is repeatedly brought up throughout the book, and not in a constructive manner. Instead of enjoying descriptions of the destroyed city, it became a point of irritation. The book is extremely short for what it tries to include, making it feel rushed. Contagion is a decent idea that didn’t quite live up to its potential.