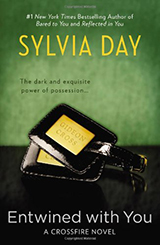 Entwined with You, the third installment of Sylvia Day’s Crossfire series continues in the racy footsteps of it’s predecessors. Gideon and Eva struggle to keep their relationship a secret in order to protect themselves from their involvement in the death of Eva’s abusive stepbrother. However, their attraction to each other is impossible to keep hidden for long. Meanwhile Eva is dragged into family drama and is fighting off an extremely nosy reporter with a grudge against Gideon.

Entwined with You was originally the third and final book in a trilogy, but became the third in a series of five after the publisher decided to extend the series. Unfortunately the book suffers in consequence, feeling cast adrift in a series that doesn’t seem to know where it’s heading next. Sylvia Day is a fantastic author, and creates believable characters, complete with flaws. Entwined with You is extremely sexy and fans of erotica and romance will certainly enjoy the book despite its lack of direction.