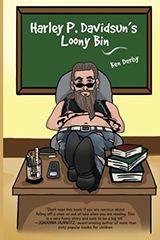 Twenty fourth graders are about to get the surprise of their life when their new fourth grade teacher walks through the door. Harley P. Davidsun is not the typical fourth grade teacher by any means. He wears jeans, boots, an earring, ponytail and smokes in class. He doesn’t teach the normal way either. He leaves class minutes after the start, gives unusual lessons and then gives the biggest challenge of all. The boys and girls must compete in a contest to see who can be the looniest of them all. The prize is a ride on Harley P. Davidsun’s bike. Despite a small setback (Mr. Davidsun has to go to the hospital after a bike accident) the children begin planning their pranks. Each day they visit their teacher in the hospital and describe the events so he can judge which side has earned the right for a ride. This leads to many hijinks and surprises for both the children and Mr. Davidsun himself.

Harley P. Davidsun’s Loony Bin bills itself as a zany and hilarious book. Unfortunately this is very misleading as there are no actual laugh-out-loud moments. There are some amusing parts surrounding several of the children’s pranks – most notably the rice balls, habanero cupcakes and fake farts. Additionally the attachment and admiration the children have for Mr. Davidsun can be touching at times. Some of the pranks are just disturbing, in particular the boys “prank” of kissing all the girls (including the teacher) on the lips and exploding balloons of “white goo” (whipped cream) on them. Both scenes felt oddly aggressive versus playful and symbolic of sexual activities instead of child’s play. There were high hopes for some good laughs at the beginning but unfortunately the joke is on the reader. This book is neither zany, funny nor enjoyable.