If I Never Went Home 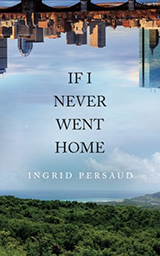 Ingrid Persaud’s debut novel, If I Never Went Home, tells the story of Bea, a Bostonian by way of Trinidad and therapist with a history of depression and an uncomfortable relationship with her past, and Tina, a Trinidadian child with her own familial traumas. In a series of flashbacks and narration that switches between the two main characters’ perspectives, Persaud skillfully weaves the story of these seemingly disparate characters together, their existences separate yet intertwining, each with her own wounds and vulnerabilities, her own traumas, and each offering the other a sense of redemption.

Beyond this complex, skillful plot, which serves to draw the reader in, encouraging continued reading, creating a sense of empathy and compassion for the characters and their personal battles, Persaud’s voice is very genuine, natural, and convincing. A native of Trinidad, the author’s voice as Tina rings authentic, her dialect coming through clear, her perspective informed by the author’s innate knowledge of Trinidadian culture. Likewise, Bea’s remembrances of her origins, her interactions with others from her part of the world, and the ways in which America has changed her seem genuine.

While there are certain aspects of the story that are not as powerful as they could be—for example, one of Bea’s flashbacks is to her pre-therapist days when depression led to time at a psychiatric hospital; this depression was caused, at least on the surface, by the loss of a relationship with a married man—the overall themes, characters, and story are strong, as is Persaud’s voice. Her powerful, clear writing and true sense of her characters make If I Never Went Home a novel truly worth reading. In less skilled hands, the story could have come across as convoluted. In Persaud’s, you believe—and you feel for the characters.