In the Name of God: The True Story of the Fight to Save Children from Faith-Healing Homicide 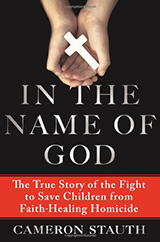 In 1974, Richard Nixon and several of his Christian Scientist aids helped erect a shield against wrongful death prosecutions when faith failed. Once again, money and politics combined to hurt people, often children. Most states followed suit and added their own shield laws. This book follows the fight by victims/activists to remove the shield.

Mr. Routh has chosen a hot spot for deaths and piety: Oregon City, Oregon, and the Followers of Christ Church. He uses a narrative style of exposition that gives the book an intimate feel as it looks at the lives and deaths of the Followers, Oregon city, and Clackamas County. There are no footnotes or appendixes, so reading the book involves more trust of the author than other styles might. The only time he dangerously threatens that trust is when he tells of a disturbed ex-member of the church who has become involved with “meth-cooking Wiccans” who also, he says, raped young girls to provide infants for sacrifice. It could happen, I suppose, but he risks losing my trust, and a lawsuit for including that bit of local color, most of which is more illuminating and less incendiary.

This battle against the shield laws is waged by the Clackamas County law enforcement agencies, the medical examiner’s office, and the District attorney’s office, aided by an informant within the church. The legislative side is tackled by Rita Swan, Author of The Last Strawberry, about the death of her son, and a tireless crusader against shield laws, both nationally and local.

America has always been tolerant of religious belief and that tolerance hampers the prosecutions, even when the medical evidence is damning and the testimony points toward deliberate neglect, resulting in gross suffering and death of dependent children. To be fair, those who believe in faith healing have a rationale to justify their actions, reinforced by group attitudes and practices like shunning that discourage doubt from creeping in. Perhaps you can understand them, but condone their actions? It took several trials and a lot of angst on both sides to begin to convince the church members that we, as a society, could not.

In the Name of God exposes one aspect of problematical religious belief and is an important book for that alone. Awareness and vigilance that it brings may prevent more tragedies.