Kant and the Concept of Race: Late Eighteenth-Century Writings 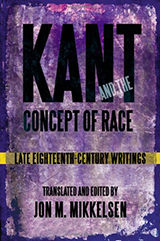 Ever since the election of Barack Obama, the first black President of the United States, commentators have been falling all over themselves to claim we now live in a post-racial society. But how true is that concept? Can we ever live in a post-racial society? Or will race always play a part in our development? In this collection we look at the underpinnings of race, and when the idea of separate races started to evolve in Europe. We get to look at this not through science, but through the philosophical writings of Kant and his contemporaries.

This work brings together some of Kant’s early writings on race, explains them in their context and then presents a translation. The editor, and translator, Jon Mikkelsen does an excellent job with this material; which is not easy to get through. He teases out the idea that race, while a modern concept, was being worked out even in the 1770s, and that it was an ever-fluid ideal. Mr. Mikkelsen makes a point that this is a small sampling, but it is an important sample, one that will be important for Ethnic Studies and Philosophy students.