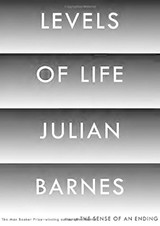 “You put together two things that have not been put together before.” This refrain, slightly varied, begins each of the three chapters that make up Levels of Life, Julian Barnes’ slight yet titanic book on love and loss. He begins with nineteenth-century hot-air balloons and continues, in an abrupt, transfixing leap, with the death of his wife, literary agent Pat Kavanagh, in 2008.

The exhilaration of flight and the perils of falling are obvious if beautiful metaphors for love. Barnes, a winner of the 2011 Man Booker Prize, has long exhibited a roving intellectual curiosity. One suspects Barnes could find meaning and connections anywhere, and balloons were simply one option among many.

“And what is taken away is greater than the sum of what was there. This may not be mathematically possible; but it is emotionally possible.”

This is not Barnes’ first meditation on death. Nothing to be Frightened of, written before his wife’s diagnosis, was a more expansive look at his own fear of death as he attempted to find solace in the conclusions of some of history’s great thinkers. Levels of Life serves as a sort of sequel, replacing his witty philosophizing with raw emotion.

It is lovely and lingering, and as anything good written about death will be, haunting. It is also overwhelming, a trigger for anyone who has lost a loved one or who has a loved one to lose: that is, everyone