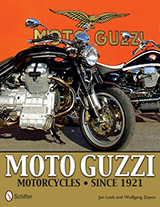 Fall in Love with Motorcycle History

Moto Guzzi: Motorcycles Since 1921 is not only a gorgeous color art book filled with luscious photos of precision machines, it is also a historical text that weaves the production of what started as a racing bike within the historical context of Italy in the early part of the twentieth century. Like any compelling entrepreneur success story, there is drama and conflict at the beginning, as the owners sought to create their niche in the post World War I market. Dozens of grainy black and white photos of earnest and hopeful motorcycle racers tell the tale of how these Italians made decisions with the senses and based on emotion above all else. The machine created by Moto Guzzi was no exception. The book details the evolution of a bike with such humble beginnings that it was first constructed without their eagle wing logo on the tank. Later models would be built so well as to go faster than two hundred miles and hour.

“It is not enough to build good motorcycles. They also have to be sold.”

Moto Guzzi: Motorcycles Since 1921 gives a chronological evolution of each motorcycle produced by Moto Guzzi, each with model specification, as well as pertinent historical information that gives context to the design of each bike – government regulations sometimes influenced the designs and features as well as limited the accessibility of these mobile pieces of art. A fantastic book for any motorcycle lover, sure to remind them of all the thoughtful and brilliant design behind motorcycles, and guaranteed to get them itching to get out there and ride.