Mr. B.: The Music and Life of Billy Eckstine 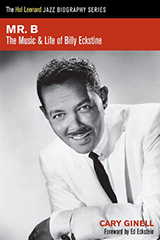 Billy Eckstine was the first black ballad singer who appealed to a large segment of the white population. Ginell outlines Eckstine’s long and somewhat tempestuous life. Handsome, articulate, and vocally strong, he would appeared to be on track to pursue a long and extremely successful career. The author points out that this career was somewhat de-railed by a photograph which showed him surrounded by admiring white female fans. The 1950 photograph is reproduced in the book.  During the 1950’s, this was not acceptable to a large segment of the white population of the United States, especially in the southern states.

Ginell points out that later African-American singers, like Nat King Cole and Harry Belafonte were able to achieve mass popularity and to a great extent, overcome these prejudices. Although the photograph did not entirely destroy Eckstine’s career, it did limit his access to a mass audience, and may well have been a factor in keeping him from the movie roles or the regular television show that he craved. He rejected movie roles that portrayed African-Americans in an unfavorable or stereotypical way, and this also probably hindered his attempts to break into Hollywood.

Eckstine loved jazz, and his orchestra included some of the most important bebop musicians at one time or another. This included the legendary Charley Parker and Dizzy Gillespie. Eckstine himself learned to play trumpet and valve trombone, and played some solos with the band. He had some success recording blues-derived tunes like Jelly, Jelly, but he was not attracted to blues, considering the music dated and simplistic. His major record successes came when he recorded pop songs of the 1930s and 1940s. These very successes doomed him to become somewhat dated as a performer, despite his later recordings for both Motown and Stax Records. Troubles with the IRS and disputes with his wives resulted in depleting his fortune, but he remained a popular performer, especially in Las Vegas clubs.

As the author points out, Eckstine is a somewhat forgotten figure today. The sort of boxed sets that celebrated many artists, have not been compiled, despite his  numerous albums. Given the quality of his band, his earlier work with Earl Hines, his recordings with such luminaries as Sarah Vaughan and his hit records of the 50s, he deserved better. The author describes Eckstine’s last musical request, which was to hear the music of his friend and musical associate Count Basie. All in all, a sad but enlightening story.