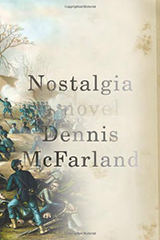 Dennis McFarland introduces the reader to an epic Civil War tale with a modern twist in Nostalgia. Summerfield Hayes, a nineteen-year-old Brooklyn baseball player, gallantly goes off to war. He is unsure of his impure feelings for his sister. He is also battling to recover from his sudden parents’ death in Ireland. Illogically, while on the battlefield, he is abandoned by his regiment in the wilderness and finds himself in a hospital with other injured soldiers. He cannot speak or write; yet the doctor believes he is faking his illness. Summerfield meets a cast of characters and watches the happenings in the hospital without being able to speak about them. The eccentric Walt Whitman visits Summerfield daily and helps him return home.

“I wouldn’t know what to write to my sister.  How can I tell her what’s to become of me when I don’t know it myself?”

McFarland writes with honesty and detailed descriptions that bring the war to life, without too many gory details. Although it is easy to believe Summerfield has suffered injuries, no scars can be found. McFarland shares details that help the reader understand the modern dilemma for post-traumatic stress disorder (PSTD). Since most of the book happens in the hospital, rather than the battleground, this reviewer appreciated the different vantage point from the typical “war novel.”