On the Trail of Genghis Khan: An Epic Journey Through the Land of the Nomads 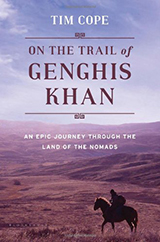 In 2004, 25-year-old Australian Tim Cope struck out on horseback across the Eurasian steppe. His journey from Mongolia to Hungary, amounting to nearly 6,000 miles over three years, was inspired by the exploits of Genghis Khan, the thirteenth-century Mongolian who led his nomadic tribes people to create history’s largest contiguous empire. While Cope thankfully did no conquering, his spirit of adventure and the seriousness of his undertaking serve as fitting tribute.

Though experienced in adventure travelling, Cope was hardly the likeliest candidate to repeat Khan’s journey, having had approximately ten days of horse training prior to his trip. Though he struggled to mount his first horse, he concluded his trip by training an untested stallion. Cope movingly describes the comfort of his “family of horses” and a Kazakh dog that Cope reluctantly adopts and inevitably comes to love. Though Cope traveled alone, he was hardly unaided. Throughout his journey Cope continually was offered food, shelter, and advice by locals, and on multiple occasions their generosity saved his possessions, his animals, and his life.

Cope’s mission betrays him as a romantic, and his account is colored by his hunger for tradition and resentment of modernization. Nevertheless, he is a keen observer, and presents through the prism of his personal experiences a tableau of both the resilient and changing culture of the nomadic peoples. On the Trail of Genghis Khan, though overlong, is not just an exciting read but an account of a significant endeavor, and offers a perspective experienced only to a privileged few.