Queen Anne: The Politics of Passion 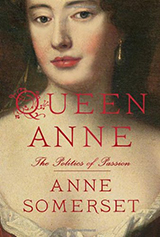 A New Look at one of England’s Forgotten Queens

Anne Somerset’s Queen Anne: The Politics of Passion examines an often-overlooked figure in English history, Queen Anne, the last monarch of the Stuart dynasty. The daughter of James II, Anne has an unlikely path to the throne, which depended on the disinheritance of her Catholic half-brother, as well as the fact her older sister had to predecease her. A staunch support of the Anglican cause, Anne was emotional, could be temperamental and haughty, and was a better and more involved ruler than she is often given credit for. Somerset is a female English historian very much in the tradition of Lady Antonia Fraser (who she was once a research assistant for), who is giving new and deserving attention to the many important roles played by women in history. Although this biography is not surprising or outside the box, it is extremely well written and engaging and it will be enjoyed by biography readers or readers who are interested in the late 17th century England.