Queens of Noise: The Real Story of the Runaways 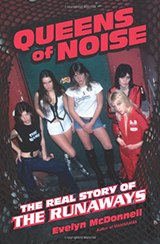 Girls Got Balls! They’re Just A Little Higher Up is All

Queens of Noise: The Real Story of the Runaways by Evelyn McDonnell gives readers a privy view into the LA rock and roll scene of the late seventies, as well as the details of the lives of the band whom has had more controversy and hearsay than fact when it comes to the details of their lore. The girls who comprised the Runaways were as young as fourteen years old when they began the journey that led to their international success. Having never met each other before, and coming from very different backgrounds, these young women each played the role of a different goddess archetype. They were sexy, athletic, surly, broody, tough as nails, and deeply sensitive. Their youth, coupled with a steady narcotics haze, a hefty amount of manipulation from the media, as well as their management, led to conflicting information about the Runaways.

“We kicked serious ass. We bombed men. We down down doors and blew out walls. We incinerated. We set fire. We devastated.”

The difference between other attempts to chronicle the renegades’ lives and this particular incarnation of their history is that Queens of Noise: The Real Story of the Runaways is told through the eyes of a smart, feminist woman who has no ego at stake, no sensationalism to gain, no digs as far as posturing or embellishment–only the desire to craft whatever amount of discernable truth from a compelling story that’s as complex as it is bizarre. The writing is crisp, self-aware, and interesting, with only very occasional use of cliché. Particularly of note is the analysis McDonnell offers as she thoroughly explores the curious circumstances that stunted the Runaways’ lasting success. And as with any good history book, reader will find themselves in rapture with the priceless collection of black and white photos of the girls on stage as well as back stage.