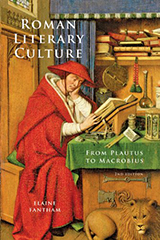 Roman Literary Culture discusses the education of some of Rome’s most well-known and studied figures. Among them are Plautus, Terrence, Cato, Pliny, Hadrian, and Marcus Aurelius. From the minds and efforts of these men comes the idea of patronage – the encouragement, financial support, or influence of a patron.

In this context, the philosophers, playwrights, poets, and historians are the recipients of such patronage. From the benefaction of these people and conquest, Rome was able to thrive as a culture and spread well beyond its borders. The merits of comedy and tragedy are explored as well as other themes such didactic poetry and the epic muse.

Roman Literary Culture is too dense to compact into this review. It is certainly worth picking up for those studying or teaching Greek/Roman history or for those that have an interest that period of time.