Sounding Imperial: Poetic Voice and the Politics of Empire, 1730-1820 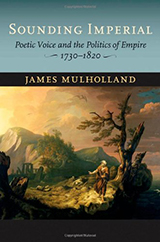 A long time ago poetry used to play a major role in society, in how it viewed itself and how others viewed it. During the rise of the British Empire, the role and concept of poetry changed over time. It was an era of the printed word, where more and more books were being printed each year, and like a traveling bard, a place where authors attempted to go back to the golden age of the spoken word. This book examines the role of poetic voice in the society and cultures of the British Empire, how they used it to tell their own stories, and how British authors used their voices to tell allegorical tales of old.

The idea of poetry and politics is old, very old, going all the way back to Ancient Greece. While it is not that important in our more modern age, it had a big impact when people first started to read books. This book attempts to look at the British Empire, and the use of poetry in it. The author spends a lot of time on Wales and Scotland, with a little bit spent on India. It would have been nice if more of the far-flung Empire had been included.