Tell Me a Riddle, Requa I, and Other Works 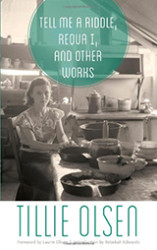 Best known for Tell Me a Riddle, a collection of four connected short stories published in 1961, writer Tillie Olsen left a brief but indelible print on the American literary landscape. In Tell Me a Riddle, Requa I, and Other Works, Olsen’s best nonfiction and fiction pieces are gathered together a century after her birth. The volume includes a foreword by Olsen’s daughter Laurie Olsen; an introduction by Olsen’s granddaughter, poet Rebekah Edwards; and a closing biography by daughters Laurie Olsen and Julie Olsen Edwards. All three are previously unpublished and help lend both a personal touch and a sense of generational longevity to Olsen’s work.

“For forty-seven years they had been married. How deep back the stubborn, gnarled roots of the quarrel reached, no one could say — but only now, when tending to the needs of others no longer shackled them together, the roots swelled up visible, split the earth between them, and the tearing shook even to the children, long since grown.”

As Edwards writers in her introduction, Olsen was hugely influential in her treatment of women and the poor: “Olsen was uncompromising in her belief that we must make a world in which ‘full humanhood’ is possible, a world in which human dignity and the full development of people’s capacities are cherished and nurtured.” Even a century later, Olsen’s writing is brilliantly measured and rich in character – a blend that few writers achieve. Coupled with essays by her daughters and granddaughter, Olsen’s newest collection is a must-have for any reader.