The Aftermath: A Novel 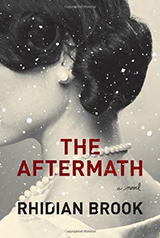 Flawed Characters Mixed with an Interesting Time in History

Rhidian Brook indulges the reader in The Aftermath to details of 1946 Hamburg during the rebuilding and denazification of Germany. Colonel Lewis Morgan, a British officer, makes the unorthodox decision to live with the German family owning the house he has been stationed in, during his work in Hamburg. Soon after Lewis moves in, his wife Rachel and son Edmund join him in the very grand home. Herr Lubert and his daughter Freda, must move to the top floor servant quarters. Lubert is still reeling from his wife’s death two years earlier. Freda is combative and divisive with secrets of her own. At the same time, Rachel is still distraught over her older son, Michael’s, death. Rachel is lonely and lost in her foreign surroundings. Rachel is very aware of what the other military families think about her living with a German family. She is intent on keeping her distance from the household “enemy.” As Rachel slowly removes the imaginary wall, and gets to know Lubert, she discovers herself again. When Lewis must leave to take another assignment, Rachel decides to secretly travel. As she is fearful, but also free, she must share a secret that will change the path she has chosen.

“In austere times, self–pity was a heavily rationed commodity, a thing no one should be caught indulging in public.”

Brook is a master with mixing the mundane details with characters’ trials and tribulations. His specifics are engrossing and the way he leads the reader down the path to be immersed is masterful. In the end, this story of passion, betrayal and ultimate truth and forgiveness will have you hooked.