The Big Picture; An Honest Examination of God, Science and Purpose 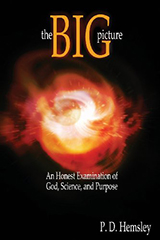 The Sound of Both Hands Clapping

P.D. Hemsley, graduate of Cambridge University and author of The Big Picture; An Honest Examination of God, Science and Purpose, attempts to make peace between those who make religious arguments and those who make scientific arguments. He presents the positions for both entrenched sides, and some points are used by both camps. But it is not clear that both sides are hearing each other. One will learn a great deal from Hemsley’s work as a lot of scientific information is presented. There is also a glossary of philosophical terms. Many scientists don’t have the time for religious arguments and point out the flawed historical arguments made by Fundamentalists who have not adapted to the times. The scientists are not always clear on what theologians are saying. Theologians can nit-pick.

Hemsley presents all points of view. He defends Christ even though he has a scientific educational background and works in the scientific field. Faith can be comforting and scientists don’t have all the answers, like how things began. Historically, Jesus was a force of good. Hemsley’s writing is fascinating. Some of his arguments are a bit brief which will be enough for some readers. Others may wish to explore the ideas further. Hemsley leaves room for further discussion. Scientists and theologians are likely to find this book interesting if they have the patience to explore the arguments. If readers are confused by the different definitions of God, this book can help clear that up. Each person will have to decide for themselves, but perhaps there is no need for a competition of beliefs between atheists and believers. Hemsley’s The Big Picture; An Honest Examination of God, Science and Purpose helps move along this important discussion.