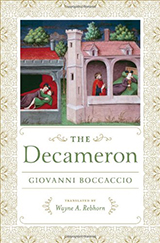 As the bubonic plague swept through Florence, Italy in 1348 and claimed the lives of 75 percent of the population, Giovanni Boccaccio began writing the one hundred stories, fables, parables and histories that would comprise The Decameron. It’s framed by ten friends, seven women and three men, who flee from the Black Plague to the countryside where they spend their days sharing these witty tales of seduction, trickery, misadventure, tragedy, magnanimity and revenge.

“Elegant ladies, as I believe you know, the wisdom we mortals possess does not merely consist of remembering things past and apprehending the present, but on the basis of these two activities being able to predict the future, which is considered by serious men to be the highest form of human intelligence.”

Translator Wayne A. Rebhorn, a professor of English and Italian at the University of Texas, shows great care in keeping the essence of the original work while making it enjoyable for modern Anglophone readers by keeping the sentence structure as close as possible and substituting puns and idioms for those more recognizable. In the notes, each story is given a source, the historical accuracy of the characters, archaic references are explained and translation choices are described in more detail. This is a must for anyone who enjoys Geoffrey Chaucer’s Canterbury Tales, which was largely influenced by The Decameron.