The Great War: A Photographic Narrative 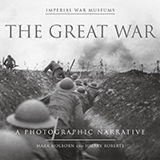 The Great War: A Photographic Narrative, edited by Mark Holborn, and verified for historic and chronological accuracy by Hilary Roberts, is one of the largest collections of World War I images in print today, and is assembled from the vast archives of the Imperial War Museums in the United Kingdom. Broken into five sections that encompass the months and years between June 1914 and November 1918, in its 500 pages, minimal text allows full-page photographs to narrate the story of the first war that was fought in nearly every corner of the globe, and that mobilized the military forces of every great world power in the infancy of the twentieth century. A mass grave prepared for New Zealand soldiers who had died in battle three years prior; French, Scottish, and Australian soldiers in the trenches; towns and buildings, empty of people, and ravaged by war. As thorough in its careful curation of the fewer than one million images from the war as it is captivating, The Great War is a poignant and powerful reminder of the devastation that a global conflict can leave behind, and a tribute to a generation whose lives were forever altered by it.