The King’s Grave: The Discovery of Richard III’s Lost Burial Place and the Clues it Holds 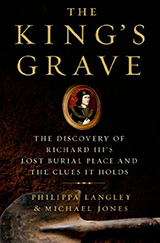 Richard the III, the King We Love to Hate

On August 22, 1485 King Richard III (House of York) August 22, 1485, was inches away from stabbing Henry Tutor (House of Tutor), his rival for the throne. The winner of the battle would not only determine who would rule England, but the fate of England. During the battle, the back of the king’s head was “shaved by blows from a sword, the back of his skull was completely cleaved off by a halberd, a two handed pole weapon, an ax blade tipped with a spike. Eight of the ten deadly wounds were to his head. Richard was the last English king to die in battle. Thus, the House of Tutor became one of the most famous ruling dynasties in history.

Richard was born in a time of great political upheaval and change, and he was a pivotal player. “Richard’s life had everything: politics, power, romance, intrigue, mystery, murder, self-sacrifice, loyalty, and acts of bravery.” But most damning bad press and stylized abuse came from Thomas Moore, influenced from the Tutor politics, as well as Shakespeare’s demonic depiction of King Richard the III. The slain king went down in history as a murderous, humpback monster that killed his own nephews.

“She had an intuition that the king was buried under a municipal parking lot and got goosebumps and “absolutely knew that I was walking on his grave.”

Philippa Langley, screenwriter, and Michael Jones, historian and biographer, both shared the same vision – to recover King Richard the Third, buried beneath layers of misaligned notoriety of politics for over 500 years. Langley’s personal vendetta was to right the wrongs of political slander. She had an intuition that the king was buried under a municipal parking lot and got goosebumps and “absolutely knew that I was walking on his grave.” Langley eventually led the archeological team to the king’s gravesite where evidence of Richard’s bones was found, “beyond reasonable doubt.”

The fascination and popularity of this novel with Americans is a testimony to our unrequited fascination with British royalty, both in the past and in the present. Co-authors Langley and Jones, write a compelling mystery of how the remains of Richard were finally discovered, though the first chapter, “Road to the Dig,” bores the reader with unnecessary details of arranging the dig.